Look at the can of soda or rice bag (or any other item you choose for the exercise).

What units do you find on the container?

What is the difference?

The standard system of measurement in the sciences, including biology, chemistry, and physics is the metric system, which, you may have learned from the prelab exercise, it is not what you use in your everyday life in the USA.

In 1975, the U.S. Metric Conversion Act was signed, declaring a national policy of “encouraging” voluntary use of the metric system.  As you may have deduced, the switch from one system to the other did not really work and today, the United States is the only country in the world not committed to adopting the system.

To give you an idea of how the two system differ you can look at Tables 1.1 and 1.2. In Table 1.1 you can see the conversion between Imperial (sometimes you will find it as English system) and Metric system units. In table 1.2 you will find some examples of everyday measurements in the Metric system.

Table 1.1 Conversion between the Imperial and the metric system

Fill in the blanks in the table using the corresponding Imperial or metric system: ex. Water freezes at 32 °F

Looking at Table 1.1 and 1.2 can you list on or two interesting difference between the two systems that you can see?

The metric system is based on decimals or powers of 10.

This 10-based system is similar to our monetary system. Think

The great thing about this type of system is that all conversions (going from one unit to the other) are in units of ten.

The refined version of the metric system used in science is called the International System of Units (abbreviated SI).

Metric base units and their prefixes

In biology, often we need to describe measurements of length, volume, mass, time, temperature or amount of substance. In Table 1.3 you can find the whole list of SI Units.

The metric system is based on the decimal system and follows a consistent name scheme using prefixes that indicates either a multiple of a unit or a fraction of a unit.  Multiples and fractions are always expressed as powers of 10.  For example, kilogram means a thousand (103) grams, megabyte means a million (106) bytes; centimeter means a hundredth (10-2) of a meter, milliliter means a thousandth (10-3) of a liter.  You can find all the prefixes in Table 1.4. The highlighted ones are the most used. The value of the metric system is in the ease of converting from one multiple to another since everything is in base 10 compared to the Imperial system. º

Try it for the example above going from 500ml to L.

Using the idea of factors of ten, you can assess the difference of the two units and cancel out the original unit algebraically to reach the desired final unit.

pay attention to the units and how we’ve canceled out the ml in the numerator of 500ml and in the denominator in the conversion of 1L in 1000ml.

Some of the basics of exponential mathematics are given below.

The primary reason for converting numbers into scientific notation is to make calculations with unusually large or small numbers less cumbersome. Because zeros are no longer used to set the decimal point, all of the digits in a number in scientific notation are significant, as shown by the examples.

Practice conversions  (THIS CAN BE A H5p EXERCISE)

In taking measurements using a particular method, it is important to know the limit of detectability, which is the smallest difference one can detect.  The significant figures are the number of digits one can read directly using the measuring device.  One can sometimes estimate an additional significant figure. Within the limit of detectability, accuracy is how close your measurement is to the true value.  Your accuracy may be limited by the available technology. You may have to be satisfied with an approximation, which is a value that is not exact.  Precision is the degree of agreement between several measurements.  Your data may be precise but not necessarily accurate because of flaws in the procedure.  In science, results obtained by one person need to be reproduced by others before they can be accepted.  Artifacts may be introduced by external factors, leading to incorrect conclusions.

This illustrates accuracy. Measurements are on target. 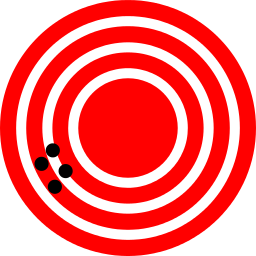 This illustrates precision. Measurements are very close to each other and repeatable. 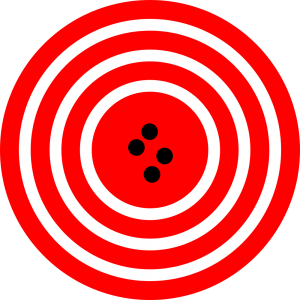 This illustrates Accuracy AND Precision. Each measurement is on target and also highly repeatable.

Here is an example which uses the above ideas:

Use a meter stick or a metric ruler to measure the following:

Why is it preferable to measure a penny in millimeters rather than centimeters or meters?

The hypothetico-deductive approach underlies most sciences.  The procedure has four stages:

(1) Observations.  Events can be observed either as they occur naturally or as the result of experiments.  In many cases, instruments such as microscopes or spectrophotometers are used.

(2) Forming hypotheses.  A hypothesis is a theory designed to explain the observations.  Assumptions are made in developing the hypothesis.

(3) Predictions can be made based on the hypothesis.

Fetal Alcohol Syndrome is a serious birth defect that results from heavy drinking during pregnancy.

Analyze the data by plotting histograms of both groups.  Calculate the mean, median and mode I.Q. for both groups.  What is your conclusion?