George Beadle and Edward Tatum first described the concept that each gene corresponded to an enzyme in a metabolic pathway by exposing the yeast Neurospora crassa to mutagenic conditions (Beadle & Tatum, 1941). Following these procedures Joshua Lederberg continued these studies with Tatum where they generated two mutants strains in Escherichia coli . These bacteria were auxotrophs, unable to generate some basic nutrients necessary to sustain their growth.  The two strains were described as met− bio− Thr+ Leu+ Thi+ (Strain A) and Met+ Bio+ thr− leu− thi− (Strain B). Strain A can sufficiently synthesize the amino acids threonine, leucine and the cofactor thiamine while deficient in producing the cofactor biotin and the amino acid methionine while the converse was true of Strain B. When either of these two strains were plated onto minimal media, no growth occurred. Supplementing minimal media with methionine and biotin permitted Strain A to grow as normal. When the two strains were mixed together and plated on minimal media, there was growth of bacteria. The two strains were capable of complementing each other in some way as if a sexual exchange of genetic material had occurred (Lederberg & Tatum, 1946).

Bacteria are equipped with all the necessary capacities to replicate DNA. Common bacterial species have bee adapted for use in the lab to carry DNA and propagate it for uses in biotechnology. In addition to chromosomal DNA of the bacterial genome, bacteria also have extrachromosomal DNA called plasmids. These plasmids replicate independently of the bacterial chromosome and can occur in high copy. These circular pieces of DNA are modified in labs to carry specific pieces of DNA so they can be studied or used for expression into proteins. Plasmids can naturally carry important traits, including antibiotic resistance. Plasmids are relatively small, ranging in size from 1000 bases to 1,000,000 bases long (1kb-1000kb).

Through a process called conjugation, bacteria can “sexually” transfer genetic material to another by passing plasmids through a structure called a conjugation pilus. 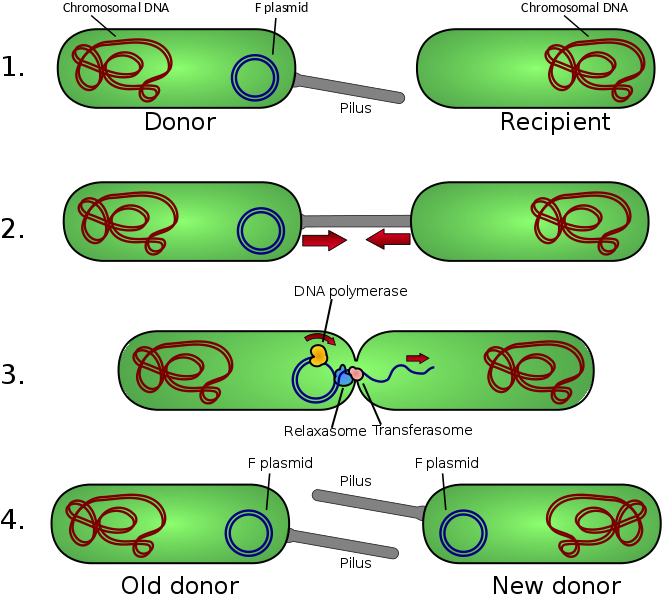 Conjugation process between a plasmid bearing donor and a plasmid-less recipient. The donor creates a conjugation pilus to create a cytosolic bridge with the donor where the plasmid is replicated into the recipient through the rolling circle method of replication. The recipient then becomes competent to act as a donor.