Drawings dating to approximately 30,000 years ago in the Chauvet Cave

What constitutes being human? Many will point at a cultural identity and leaving long-standing remnants of that culture. Such prehistorical artifacts like cave drawings and tools provide an anthropological framework for identifying what it is to be human, but the biological identity remains locked in the history of our DNA.

Spear points of the Clovis Culture in the Americas dating to approximately 13,000 years ago. Credit:Bill Whittaker [CC-BY-SA 3.0] 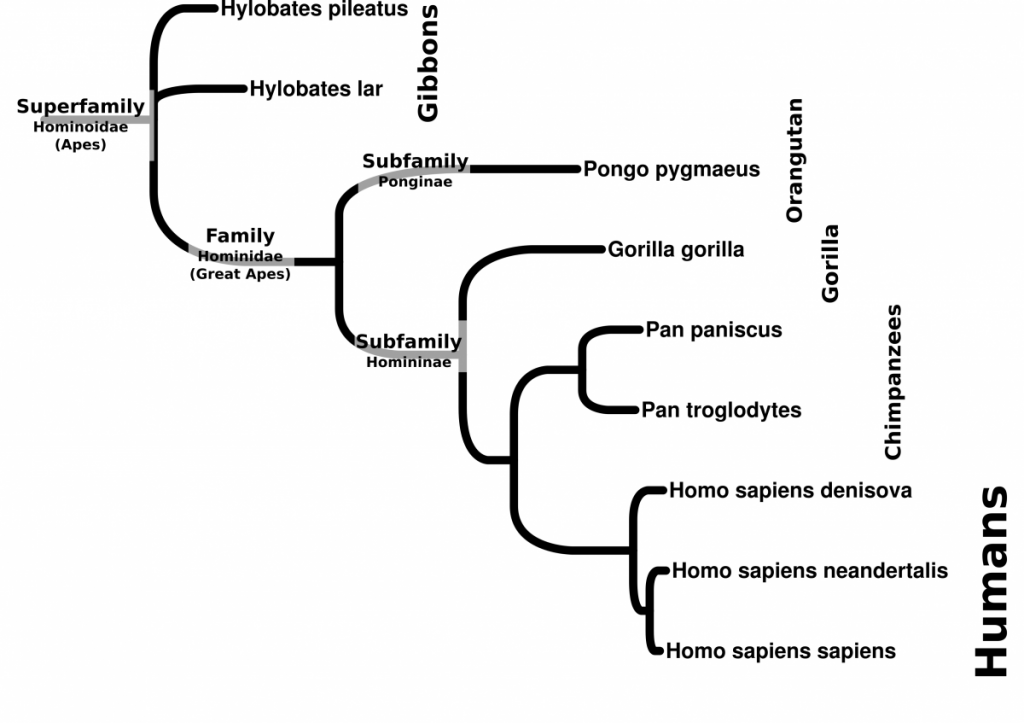 Homo sapiens represent a branch of primates in the line of Great Apes. The family of Great Apes consists of four extant genera: Homo, Pan, Gorilla, Pongo. Karyotype analysis (Yunis et al., 1982) reveals a shared genomic structure between the Great Apes. While humans have 46 chromosomes, the other Great Apes have 48. Molecular evidence at the DNA level indicates that Human Chromosome 2 is a fusion of 2 individual chromosomes. In the other Great Apes, these 2 Chromosomes are referred to as 2p and 2q to illustrate their synteny to the human counterpart. Synteny map of Human, Chimpanzee, Gorilla, Orangutan and Marmoset (non-ape primate). Mapping of chromosome 2a and 2b in the apes compared to 6 and 14 in the marmoset illustrates the relatedness of the chromosomal structure of the apes. Minor inversions are apparent in the orangutan chromosome. Credit: Jeremy Seto [CC-BY-NC-SA]

Chimpanzees (Pan) are the closest living relatives to modern humans. It is commonly cited that less than 2% differences in their nucleotide sequences exist with humans (Chimpanzee Sequencing and Analysis Consortium, 2005). More recent findings in comparing the complement of genes (including duplication and gene loss events) now describes the difference in genomes at about 6% (Demuth JP, et al., 2006). 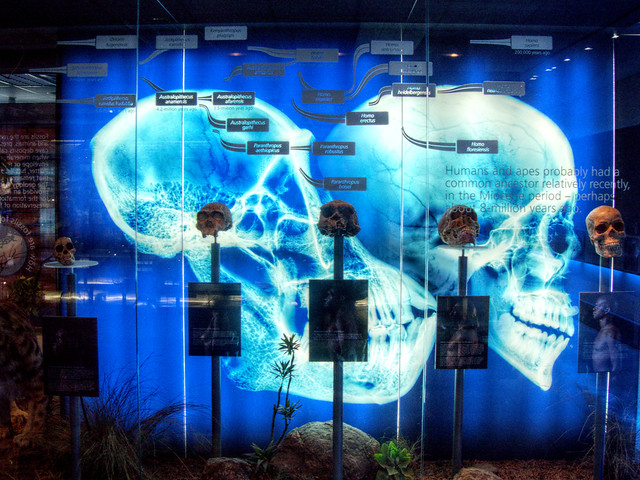 The Pan-Homo divergence. A display at the Cradle of Humankind illuminates the skulls of two extant Hominini with a series of model fossils from the Hominina subtribe of Austrolopithecina and Homo. Credit: Jeremy Seto [CC-BY-NC-SA] https://flic.kr/p/SmhHTd 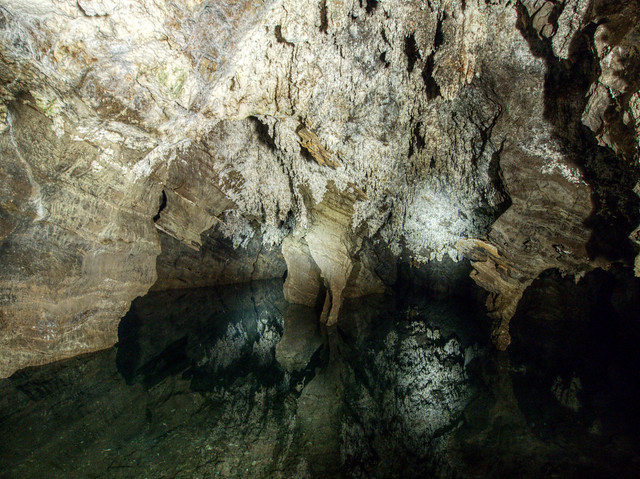 An underground lake at inside the Sterkfontein Cave system at the Cradle of Humankind (South Africa) Credit: Jeremy Seto [CC-BY-NC-SA] https://flic.kr/p/RczrEg

The rise of the human lineage is thought to arise in Africa. Fossils of Austroloptihs (southern apes) found in death traps, like those at the Cradle of Humankind, reveal a historical record of organisms inhabiting the landscape. The breaks in the ceiling of the caves  provide opportunities for animals to fall inside these caves to their death. The limestone deposits of the caves serve as an environment for fossilization and mineralization of their remains. An abundance of fossilized hominids in these caves including Australopithecus africanus, Australopithecus prometheus, Paranthropus boisei, and the newly discovered Homo naledi continue to reveal the natural history of the genus Homo from 2.6 million to 200,000 years ago. 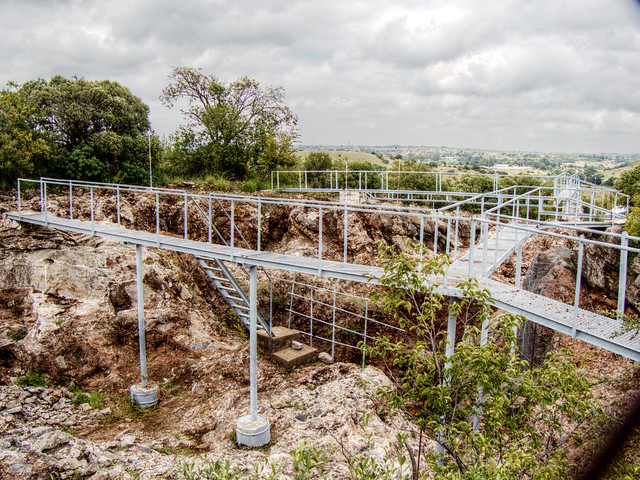 In 2008, a  piece of a finger bone and a molar from a Siberian Cave were found that differed  slightly from that of modern humans and Neandertals. The cave, called Denisova Cave, maintains an average temperature of 0ºC year round and the bones were suspected to contain viable soft tissue. An initial mitochondrial DNA analysis revealed that these hominids represented a distinct line of humans that overlapped with them in time (Krause et al., 2010). Analysis of the full nuclear genome followed and indicated that interbreeding existed between these Denisovans, Neandertals and modern humans (Reich et al., 2010). Furthermore, analysis of DNA from a 400,000 year old femur in Spain revealed that these three lines diverged from the species Homo heidelbergensis with Denisovans closest in sequence similarity (Meyer et al., 2016).

Between modern humans, markers found in the mtDNA can be used to trace the migrations and origins along the maternal line. Similarly, VNTRs found on the Y chromosome have revealed migration patterns along paternal lines within men. Other markers, like the insertion points of transposable elements can be used to further describe the genetics and inheritance of modern humans while providing a snapshot into evolutionary history.