Mobile genetic elements called transposable elements or transposons are located throughout the genome. These elements were first described in maize by Barbara McClintock at the Cold Spring Harbor Laboratory where she observed a disruption of coloring in corn kernels that did not follow simple Mendelian inheritance. 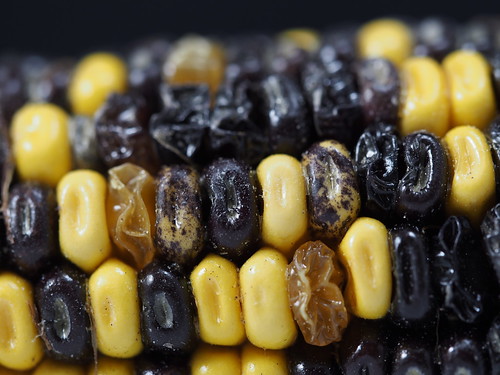 Each kernel represents a distinct new individual organism. Kernel color is described through simple Mendelian inheritance where purple is dominant over yellow. Dr. McClintock noticed that some kernels contained spots. She noticed that the coloration disruption could later reverse in subsequent generations. She described the phenomenon of this break in the Mendelian characteristics as a “genetic instability”. Over time, she would come to realize that the spots in these kernels arose from the insertion of DNA into the area of genes that were involved in controlling kernel coloration.

Dr. McClintock’s description of this phenomenon and the underlying mechanisms was extremely unpopular as it violated what was already known about the fixity of genetics. Though initially skeptical, biology has found that these “jumping genes” are found in every taxa including prokaryotes (where they are often associated with genes conferring antibiotic resistance) and she was later awarded the Nobel Prize.  Approximately half of the human genome consists of transposons, making up the bulk of what was previously referred to as “junk DNA”. (See Animation: http://www.dnaftb.org/32/animation.html)

Transposons can be autonomous or non-autonomous. Autonomous transposons encode their own transposase enzyme that facilitates the jumping of the gene while non-autonomous transposons require the transposase activity of another transposable element. Functional DNA transposons are autonomous and work through a “cut and paste” mechanism. DNA transposons are delineated by flanking terminal repeats that mark the location that the transposase excises the DNA. These DNA elements then re-integrate at a different location within the genome. The excision from DNA leaves marks of these flanking repeats that can be used to study the rate and level of DNA transposition events within a genome. The insertion of these transposons can effect the expression of nearby genes and can completely disrupt genes they land into as evidenced in the speckled corn kernels that McClintock described.

RNA transposons are called retrotransposons because they are transcribed into an mRNA and require a reverse transcription to integrate into the genome. The most common mobile element in the human genome are the Long Interspersed Nuclear Elements (LINEs) and the Short Interspersed Nuclear elements (SINEs). These retrotransposons are most abundantly represented by the autonomous LINE1 (L1) and non-autonomous Alu elements, respectively. Alu elements rely on the expression of the L1 in order to be reverse-transcribed and integrated into the genome. These retrotransposons work in a “copy and paste” mechanism and are responsible for genomic expansion. As their classifications signify, LINEs are longer than SINEs. This is due to the presence of a second reading frame that encodes the transposase.

Advanced Video of Classification of Transposons and the Evolution of Genomes