Introduction: The Cell Cycle and Mitosis

The cell cycle refers to the a series of events that describe the metabolic processes of growth and replication of cells. The bulk of the cell cycle is spent in the “living phase”, known as interphase. Interphase is further broken down in to 3 distinct phases: G1 (Gap 1), S (Synthesis) and G2 (Gap 2). G1 is the phase of growth when the cell is accumulating resources to live and grow. After attaining a certain size and having amassed enough raw materials, a checkpoint is reached where the cell uses biochemical markers to decide if the next phase should be entered. If the cell is in an environment with enough nutrients in the environment, enough space and having reached the appropriate size, the cell will enter the S phase. S phase is when metabolism is shifted towards the replication (or synthesis) of the genetic material. During S phase, the amount of DNA in the nucleus is doubled and copied exactly in preparation to divide. The chromosomes at the end of G1 consist of a single chromatid. At the end of S phase, each chromosome consists of two identical sister chromatids joined at the centromere. When the DNA synthesis is complete, the cell continues on to the second growth phase called G2. Another checkpoint takes place at the end of G2 to ensure the fidelity of the replicated DNA and to re-establish the success of the cell’s capacity to divide in the environment. If conditions are favorable, the cell continues on to mitosis. Eukaryotic cell cycle is governed by expression of cyclin proteins along with their activity. Credit: Jeremy Seto (CC-BY-SA)

Mitosis is the process of nuclear division used in conjunction with cytokinesis to produce 2 identical daughter cells. Cytokinesis is the actual separation of these two cells enclosed in their own cellular membranes. Unicellular organisms utilize this process of division in order to reproduce asexually. Prokaryotic organisms lack a nucleus, therefore they undergo a different process called binary fission. Multicellular eukaryotes undergo mitosis for repairing tissue and for growth. The process of mitosis is only a short period of the lifespan of cells. Mitosis is traditionally divided into four stages: prophase, metaphase, anaphase and telophase. The actual events of mitosis are not discreet but occur in a continuous sequence—separation of mitosis into four stages is merely convenient for our discussion and organization. During these stages important cellular structures are synthesized and perform the mechanics of mitosis. For example, in animal cells two microtubule organizing centers called centrioles replicate. The pairs of centrioles move apart and form an axis of proteinaceous microtubules between them called spindle fibers. These spindle fibers act as motors that pull at the centromeres of chromsomes and separate the sister chromatids into newly recognized chromosomes. The spindles also push against each other to stretch the cell in preparation of forming two new nuclei and separate cells. In animal cells, a contractile ring of actin fibers cinch together around the midline of the cell to coordinate cytokinesis. This cinching of the cell membrane creates a structure called the cleavage furrow. Eventually, the cinching of the membrane completely separates into two daughter cells. Plant cells require the production of new cell wall material between daughter cells. Instead of a cleavage furrow, the two cells are separated by a series of vesicles derived from the Golgi. These vesicles fuse together along the midline and simultaneously secrete cellulose into the space between the two cells. This series of vesicles is called the cell plate. 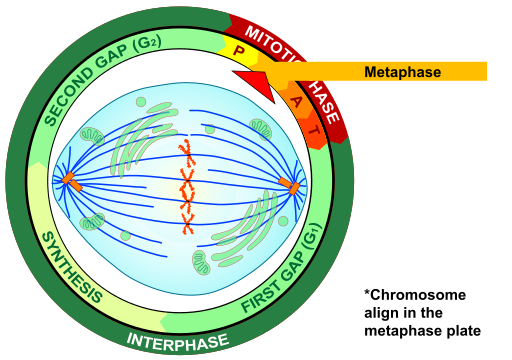