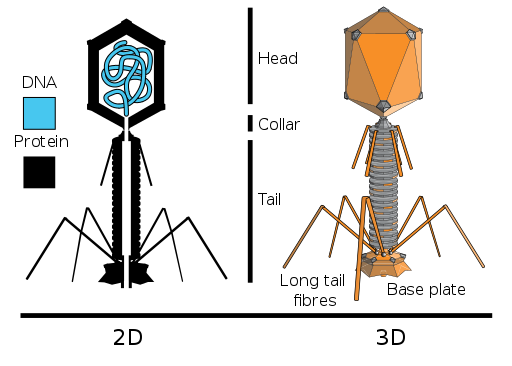 Hershey and Chase studied bacteriophage (phage=eater). Phage are bacterial viruses that infect bacteria and cause lysis of the cells. They have a very simple structure of a proteinaceous head/collar/tail and a DNA core. It was known that bacteria infected with phage were resistant to additional infection. In 1952 Hershey and Chase grew bacteriophage in conditions that would specifically label either the DNA or the protein with radioactivity. They subsequently took phage with radiolabeled DNA and infected bacteria. In parallel, they took phage with radiolabeled protein and infected another set of bacteria. After just enough time for infection, the bacterial cultures were placed into a blender to separate the bacteriophage from the bacteria.

Solutions were centrifuged to isolate bacteria from the phage. Bacteria were radioactive only when the phage grown in conditions to radiolabel DNA infected the bacteria to indicate that DNA might be the transforming agent.

Questions to think about: