In the laboratory, model organisms are modified in order to understand the basic mechanisms of genes. The transformation of recombinant DNA into bacteria is an example of a genetic modification. Other model organisms, like mice, are used to study genes. Through recombinant DNA scientists can selectively ablate a gene, or create a knock-out (KO).
Embryonic Stem (ES) cells are pluripotent cells with the capacity to differentiate into other cell types. Cultured ES cells can be transfected with plasmid DNA in order to genetically alter them. Linearized vectors containing a disrupted gene can homologously recombine with the native gene to replace it. Selection of cells with the disrupted gene by an antibiotic (like G418) enables the isolation and propagation of engineered ES cells. 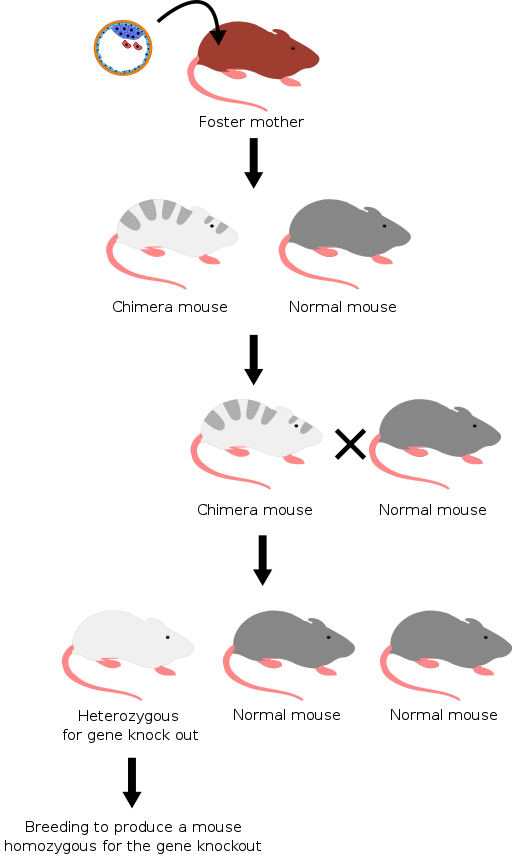 ES cells can be injected into mouse blastocysts and partially contribute to the subsequent mouse upon implantation into a mouse. These first mice are referred to as chimeras because they arise from mixtures of cells from 2 genetic sources. Germ-line transmission of the modified cells is desired and breeding of the chimera reveal heterozygous offspring of the engineered background. Full knock-out mice can be generated in the subsequent generation of breeding.

Scientists can also overexpress or heterologously express foreign genes in what are termed transgenic organisms. As the name sounds, transgene refers to a gene from one place brought across into another.

Transgenic and KO models permit scientists to study the roles of genes inside the organism and understand basic functioning.

Through mutagenesis, derivatives of the green fluorescent protein (GFP) have been produced to provide a palette of colors. Additionally, the subsequent discovery of similar genes from other cnidarian species have aided biotechnology by providing tracer molecules within developing organisms or within cells.

While commercial organisms like GloFish are a novelty, directed insertion of GFP and the variants into the genome under different promoter systems allow scientists to understand the cell-specific functioning or contribution to the organism. An example of this can be found in developmental neurobiology where individual axons can be traced.

A “brainbow” is a system where a cassette of GFP variant genes are placed downstream of neuronal promoter to permit the tracing of individual neurons and their axons in mice. Credit: Jeff W. Lichtman and Joshua R. Sanes (CC-BY 3.0) 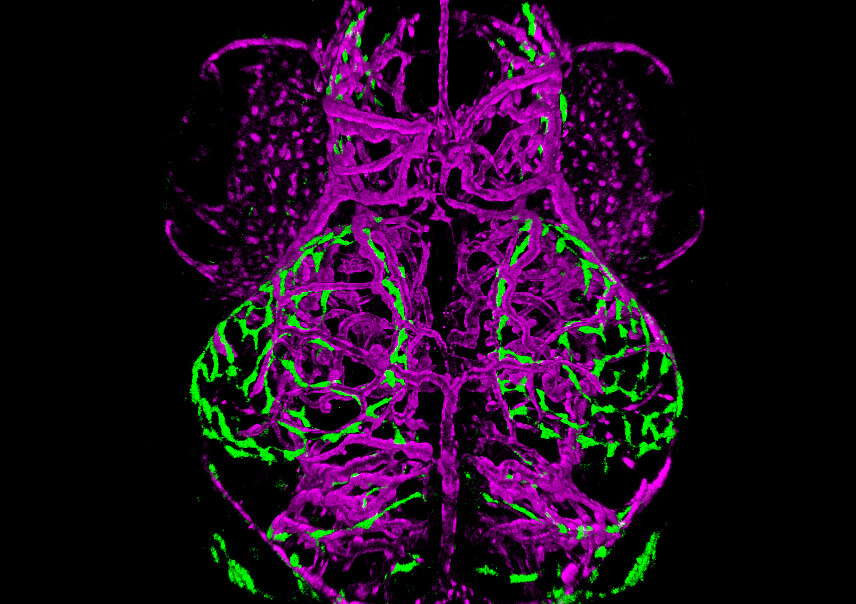 Brain of a 10-day old double transgenic zebrafish. Blood vessels are shown in magenta (Kdrl:mcherry) and a novel population of perivascular endothelial cells are shown in green (MRC1a:eGFP).